The hugely popular comic book series, PRIYA’S SHAKTI, featuring the first female Indian superhero and rape survivor is premiering the next chapter at the New York Film Festival at Lincoln Center from September 30 to October 16, 2016. Funded by the World Bank, the next edition titled, PRIYA’S MIRROR, focuses on acid attacks and tackles the problem of sexual violence in India and around the world. Afterwards, the comic book will launch in India at the Mumbai Comic Con from October 22-23, 2016. The comic book was created and features acid attack survivors from New York City, Bogota, and New Delhi.

In its second edition as well, creators Ram Devineni, Paromita Vohra, and Dan Goldman, have partnered with the leading visual discovery and augmented reality app Blippar — to integrate cutting-edge technology with this breakthrough series. By scanning the cover and pages of the comic book with the free Blippar app, readers can unlock exclusive content including 3D-animation, real-life stories, and other fully-immersive experiences, such as a virtual photo-op & selfie-share for #TheLastMask campaign — allowing them to delve deeper into the subject. It was in fact almost two years ago that the team first got together with Blippar, to revolutionise the publishing industry as well as social-impact media, with one massive game changer — augmented reality!

Joining them is Monica Singh, who shares her resilient story from surviving a brutal acid attack to becoming a fashion designer and UN Women’s Global Youth Champion, “As one of the characters in Priya’s Mirror, and through my own endeavors; I hope to inspire other women, who have gone through similar violent attacks, to find courage and confidence.” Also featured in the comic is Natalia Ponce de Leon, who had a liter of sulfuric acid thrown over her face and body by a man who she had never spoken to in Bogota, Colombia. She adds, “Priya’s Mirror not only portrays the courage and beauty of us acid attack survivors, but it also serves as a highly creative tool to educate younger generations about gender equality.” 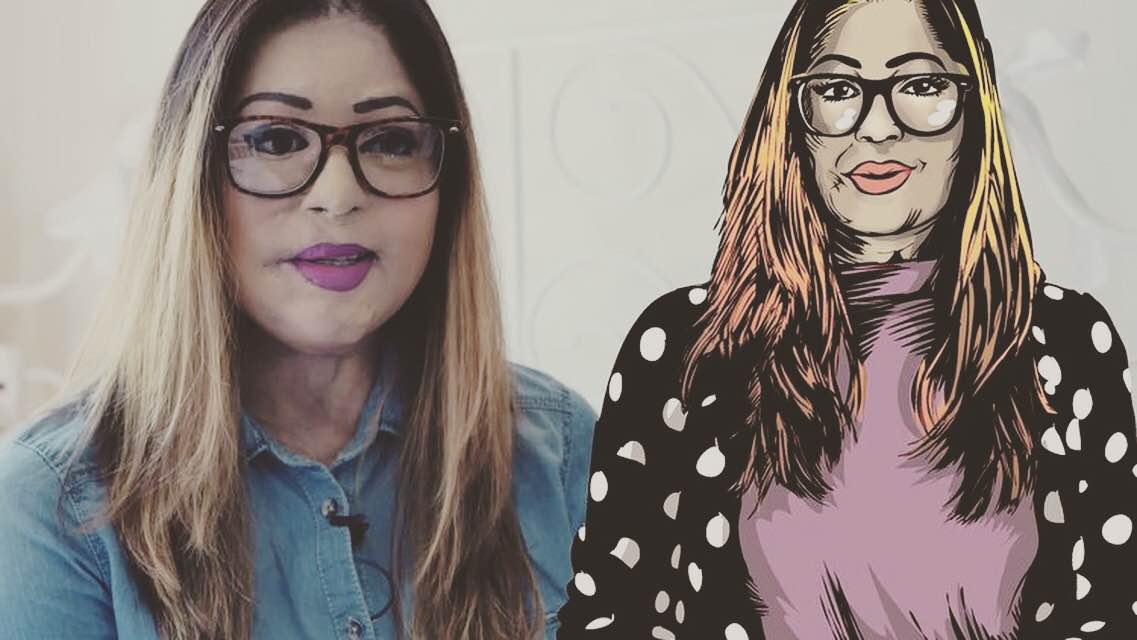 Commenting on the interactive exhibition at Lincoln Center, Founder & CEO of Blippar, Ambarish Mitra said, “We are thrilled to partner on the latest edition of their series, Priya’s Mirror,and bring the issue of sexual violence to the forefront, via this blippable, augmented reality comic book. The augmented reality element allows readers to feel more connected with the survivors. Technology is being used here as the vehicle of engagement driving impactful social-change and this is extremely powerful.”

Inspired by ancient mythological tales, the comic book tells the story of Priya—a mortal woman and gang-rape survivor—who join forces with a group of acid attack survivors as they fight against the demon-king, Ahankar, and his tyrannical hold on them. “Priya is a new path-breaking and powerful symbol,” adds Dan Goldman, “originally a response to the horrible ’Nirbhaya’ gang-rape that happened on a bus in New Delhi in 2012. It is important to create solidarity between survivors of gender-based violence and to encourage men and boys to stand alongside women against patriarchy, misogyny and indifference.”

The comic book series was honored by UN Women as a “gender equality champion” and had over 500,000 downloads and hundreds news stories written about it reaching millions of readers worldwide. Additionally, several large colorful murals from the comic book were painted on walls throughout Mumbai and New Delhi. Audiences are able to unlock special animation and movies that pop out of the wall when they scan the murals with Blippar, via their smart phones.

The comic book was funded by the World Bank’s WEvolve Global Initiative, which is aimed at changing attitudes and behaviors that lead to gender inequities, including gender violence. Priya’s Mirror is co-produced with Mahendra Singh Foundation in New York and India, and Fundacion Natalia Ponce de Leon in Bogota, Colombia – both NGOs provide support to victims of physical and sexual abuse, and acid attacks for rebuilding their confidence and strength on their journey to becoming survivors. The project’s non-profit engagement partner is Apne Aap Women Worldwide – one of the world’s leading NGOs supporting at-risk girls and women in India and the U.S. by ensuring them access to their rights and working for policy and social change. The comic was originally funded by the Tribeca Film Institute Media Fund from the Ford Foundation.

The comic book is free worldwide in every digital format and downloadable in English, Spanish, Italian, Portuguese and Hindi off the project’s website. Rattapallax, a literary publishing house and film production company based in New York City and New Delhi, is producing the entire project.

For buying comic book in terms of Donating to upcoming project for Rape and Domestic Abuse Victim.